Warrington Township Police Department is mourning the sudden loss of K-9 Officer Stephen Plum, Jr., an eight-year veteran of the department and a veteran of the United States Marine Corps. Officer Plum passed away Monday, May 16, 2022 at the age of 38. His cause of death is pending the results of an autopsy.

Officer Plum was known for his kindness, infectious laugh, smile, and big heart, which impacted everyone around him, including those in the Warrington community he served with honor and dedication. A devoted husband, father, son, brother and friend, Officer Plum is survived by his wife and best friend Nancy, five children (four sons and a daughter), parents, siblings, friends, his beloved K-9 Murphy and his fellow officers in law enforcement.

Warrington Police Department Chief Daniel Friel stated, “It is with the heaviest of hearts that we share the sudden passing of our K-9 Officer Stephen Plum, Jr.  Fondly known as ‘K-9 Murphy’s human,’ Officer Plum accomplished so much in his time with us.  He was devoted and committed to our K-9 Unit and to his partner Murphy. The officers and staff of the Warrington Township Police Department are going through an extremely difficult time as we mourn the loss our Officer and friend. Please keep his family in your thoughts during this difficult time.”

Funeral arrangements are pending and will be announced at a later date. A GoFundMe page has been set up to help support Officer Plum’s family through this difficult time and in the foreseeable future. Donations can be made, here. Donations can also be mailed to or dropped off at the Warrington Township Police Department’s headquarters, located at 2330 Lower Barness Road, Warrington, PA 18976. Checks can be made payable to Nancy Plum. 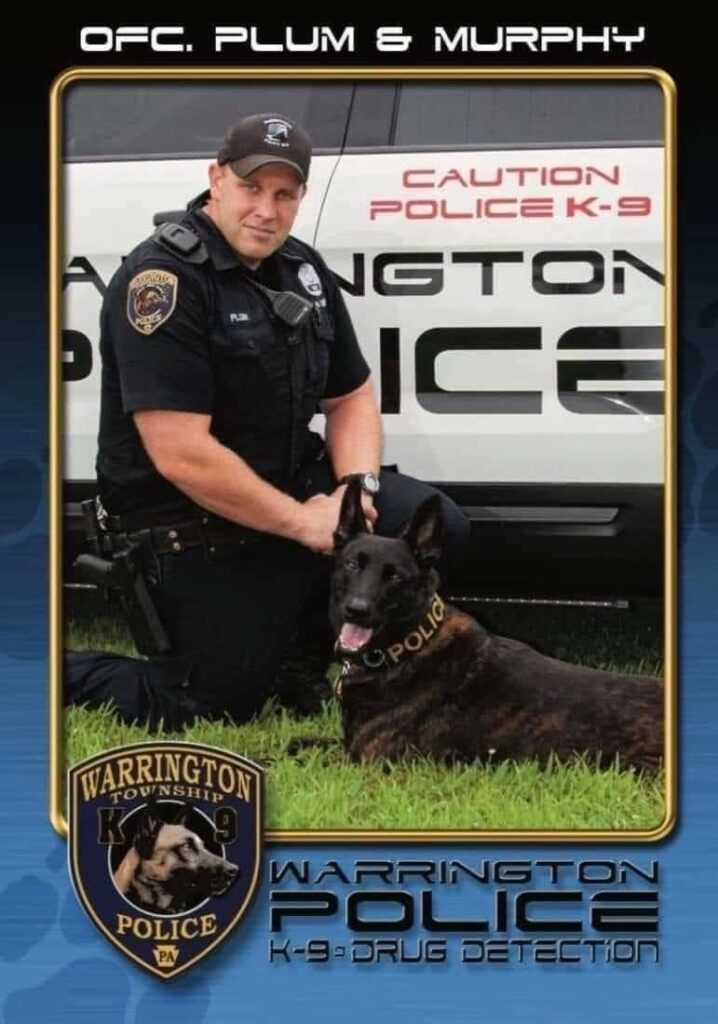 Officer Stephen Plum, Jr. was born and raised in Abington, PA and served in the United States Marine Corps for four years, where he earned the rank of Corporal. During his tenure in the Marines, he served as a rifleman with the 2nd LAR Battalion, 2nd Marine Division and was deployed to Iraq, where he earned the Combat Action Ribbon and other awards.

After completing his military service, Officer Plum served as a firefighter with the Abington and Roslyn Fire Companies and worked for the Fire Marshall’s Office for Abington Township. He also served as an EMT with Second Alarmers Rescue Squad in Willow Grove and worked for the Rockledge Borough and SEPTA Police Departments.

Officer Plum joined the Warrington Township Police Department in 2014 and over the past eight years served with the following specialty units:

In 2018 earned his way into Warrington Township Police Department’s first ever K-9 Unit, where he was partnered with K-9 Murphy. His family has shared that ever since he was a kid, he wanted to be a K-9 officer.  To see Officer Plum finally in this role, was to see a man living out his childhood dream.  He loved every second of it, even cleaning up after Murph!  He was designated the supervisor of the K-9 Unit where he and his wife, Nancy, were instrumental in organizing multiple successful fundraisers for the Unit.  Officer Plum and Murphy were an integral part of the K-9 Unit, ALWAYS stepping up to participate in community events and meet and greets. He was more than willing to step aside and let Murphy be the star that he is.

Officer Plum is survived by his wife and best friend, Nancy Plum and five children – Andrew, Aiden, Wyatt, Emmet, and Francesca, who range in age from 14 years to 18 months. He was a friend to many and enjoyed camping hunting, ATV’ing, spending time on his aunt’s farm with family, and being with his wife and kids.

A GoFundMe page has been set up to support Officer Plum’s family as they navigate their unfathomable loss in the coming days, weeks, months and beyond. Donations can be made via https://www.gofundme.com/f/support-for-officer-stephen-plum-jrs-family?utm_campaign=p_cp+share-sheet&utm_medium=copy_link_all&utm_source=customer or can be dropped off at/mailed to Warrington Township Police Department, 2330 Lower Barness Rd., Warrington, PA 18976. Checks can be made payable to Nancy Plum. 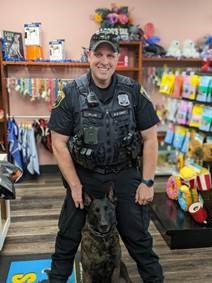 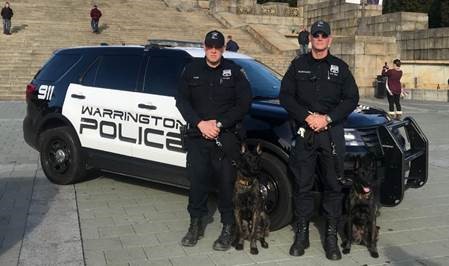 Warrington Township The Gateway to Bucks County Since 1734